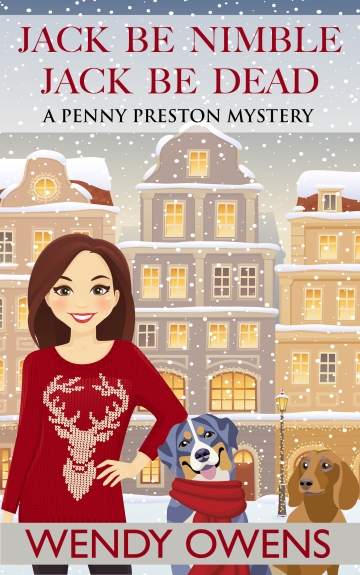 4 stars, based on 37 reviews
Buy on Amazon

Jack Be Nimble, Jack Be Dead

Wyoming Ohio is the place you move when you are ready for the quiet life—at least that’s what Penny Preston thought.

Five years ago, Penny Preston found herself divorced and alone in San Diego, CA. With only her Dachshund named Piper and the possessions she could fit in her beat up Chevy Malibu, Penny decided to take her Aunt up on her offer to move in with her in Wyoming, Ohio, and help her run her coffee shop. She never imagined her Aunt passing away or her leaving the shop to her, but that’s exactly what happened.

Besides the occasional nosy community member creating a stir around unsubstantiated gossip, life was peaceful—that’s until Penny’s life got messy . . . as in red body messy. Jack Eggerton, the local dog catcher, is found dead in the back of the animal shelter Penny runs in her spare time. After a heated argument between her and Jack about a missing dog, it appears the finger is pointed directly at Penny Preston. Enlisting the help of her seamstress neighbor, Linda, and her chubby Dachshund, Piper, with whom she has a rather peculiar connection to, Penny sets out to unveil the killer before she is left paying for a crime she didn’t commit…

Others in The Penny Preston Mysteries